Are Sushi, Sashimi and Nigiri Kosher?

Are Sushi, Sashimi and Nigiri Kosher?

As the world becomes more and more interconnected, and as people of different faiths and cultures become more exposed to the culinary traditions of other nations, certain questions are going to come up, particularly with those cultures that have certain restrictions or prohibitions on specific types of food.

One of the oldest known dietary restrictions for many people is the Jewish rules regarding keeping kosher. And, as we at Matsuhisa were pleased to find out, it’s possible to eat sushi and keep kosher.

As far as fish goes with regards to keeping kosher, the first basic rule is that the fish has to have fins and scales. While this does rule out things like unagi, uni and lobster, it leaves things like tuna, yellowtail and salmon as viable options.

Combined with other rolls like veggie rolls and kappa (cucumber), there are plenty of possibilities. Beyond the nature of the ingredients, technically a kitchen has to be specifically certified as “kosher,” undergoing a rigorous process to make sure specific standards are being met.

Over the last several years, kosher sushi bars have become a thing, sometimes to the amazement of everybody involved. Where it was once considered unusual to have sushi, it has since become far more accepted. It’s reached a point where Jewish sushi lovers are trying to find the best ways to enhance their dining experience while still keeping kosher, and coming up with inventive new ideas about sushi.

Some people who are still warming up to sushi as a whole have already discovered the joys of tataki and aren’t afraid to use smoked salmon for their salmon rolls.  Others have flung themselves into the sushi scene wholeheartedly.

For example, the Jewish holiday of Passover presents a problem for those who want sushi: No grains are supposed to be consumed. So no bread, no breakfast cereal and definitely no sushi rice. While they could theoretically indulge in sashimi when they get a craving, a viable workaround has been found in quinoa, which bears a relationship more to spinach and beets than rice and wheat.

At Matsuhisa restaurants, we’re happy to serve customers trying to follow a kosher diet as much as possible. Feel free to look over our menu and see what might satisfy your hunger and your faith. 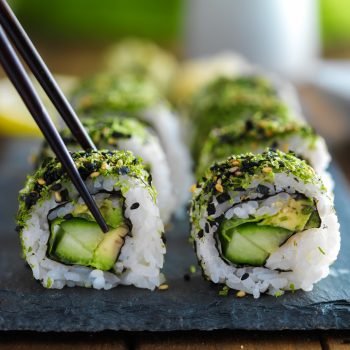