Is Sushi Japanese, Korean, or Chinese?

Is Sushi Japanese, Korean, or Chinese?

For many sushi lovers, it comes as a bit of a surprise to learn that this delicious food has a fairly complex history. Today’s sushi is most often associated with Japanese culture, though the many variations of sushi can actually be traced to numerous countries and cultures including Japanese, Korean, and Chinese.

The History of Sushi

Throughout several Asian countries, sushi has a place in culinary history as early as the second century CE. It’s believed the earliest version of sushi was created in the paddy fields along the Mekong River, serving as an effective way to preserve fish through fermentation and the addition of rice and salt. In Japan, a more modern version of sushi emerged when raw fish was wrapped with sticky rice, becoming especially popular between the mid-1300s and the 1500s.  Eventually, the Edo period in Japan brought about a version of sushi that combined fish, rice, vegetables, and various dried ingredients to produce a flavorful and delicious dish.

What is the Difference Between Korean, Chinese, and Japanese Sushi?

Sushi has taken on a variety of forms in different cultures, with the most distinct versions emerging from the Korean, Chines, and Japanese cultures. The variations between each contribute to the dynamic, creative role that sushi plays in the culinary world.

Why Choose Japanese Sushi from Matsuhisa

At Matsuhisa, our sushi menu is a proud representation of all the best characteristics of Japanese sushi: impeccably fresh fish, distinct flavor combinations, and the perfect balance of textures. Our sushi chefs have spent years perfecting their craft, resulting in a dining experience that embodies the height of Japanese sushi. Whether you’re a longtime sushi lover or simply looking to try the Japanese staple for the first time, let Matsuhisa take your sushi experience a new level.

Lunch at Matsuhisa: Not Your Average Japanese Restaurant

Omakase: A Japanese Food Experience Including the Best Sushi in Denver 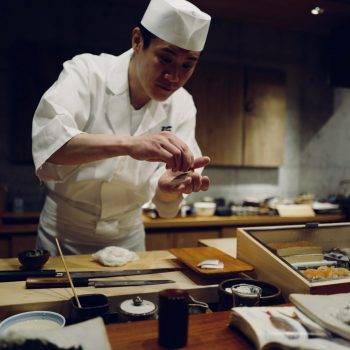